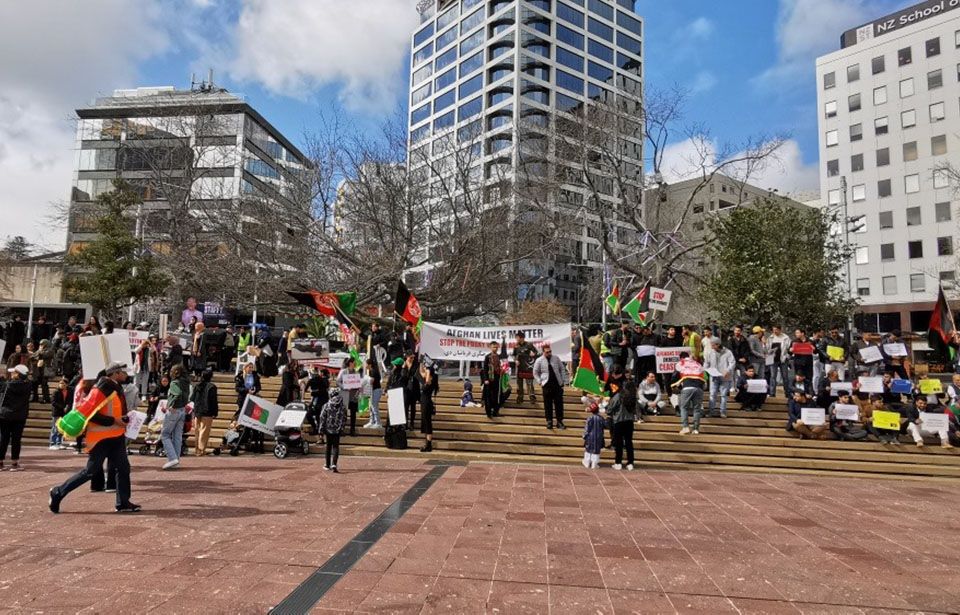 Afghan Kiwis and supporters gathered for an anti-Taliban rally in downtown Auckland on Sunday. Photo: supplied

An Afghan leader in New Zealand says his community welcomes the Government’s plans to evacuate New Zealanders and at-risk Afghan nationals with their families, but the process needs to be expedited safely.

Prime Minister Jacinda Ardern announced on Monday that New Zealanders in Afghanistan and their immediate families would be repatriated.

She also said Afghan nationals who worked with the New Zealand Defence Force, police, the Ministry of Foreign Affairs and Trade, or helped with New Zealand's Operation Burnham inquiry, would be evacuated with their immediate nuclear family.

A similar resettlement was announced under the National government in 2012, which helped 23 Afghan interpreters move to New Zealand with their dependants, but those left out could only arrive as refugees.

Naqib Mia, the chairperson of the Afghan Association of New Zealand, said it was a good decision to also evacuate the immediate families of Afghan individuals under risk from Taliban forces who this week successfully took the Afghan capital, Kabul.

“Leaving their families behind would be difficult for them,” he said.

“It’s a very fluid situation in Kabul, especially near the airport, and it needs to be expedited in a safer manner that no one’s health and wellbeing is harmed.”

Mr Mia also said he wasn’t aware of any Afghan translators in New Zealand having stranded family members, but he admitted the translators were scattered across the country, and the Auckland-based Afghan Association only know “one or two” of them.

“We encourage the Government to bring those who are left behind.”

The New Zealand Afghan community will help in any way they can if needed, he added.

Jacinda Ardern said the Government was aware of 53 New Zealanders in Afghanistan and all have been offered consular assistance, and it would look at ways that New Zealand could support the humanitarian response.

She added there might be opportunities in the longer term to resettle additional applicants from Afghanistan.

Defence Minister Peeni Henare told RNZ that a RNZAF C-130 Hercules aircraft with 40 Defence Force personnel could be deployed as early tomorrow for the evacuation.