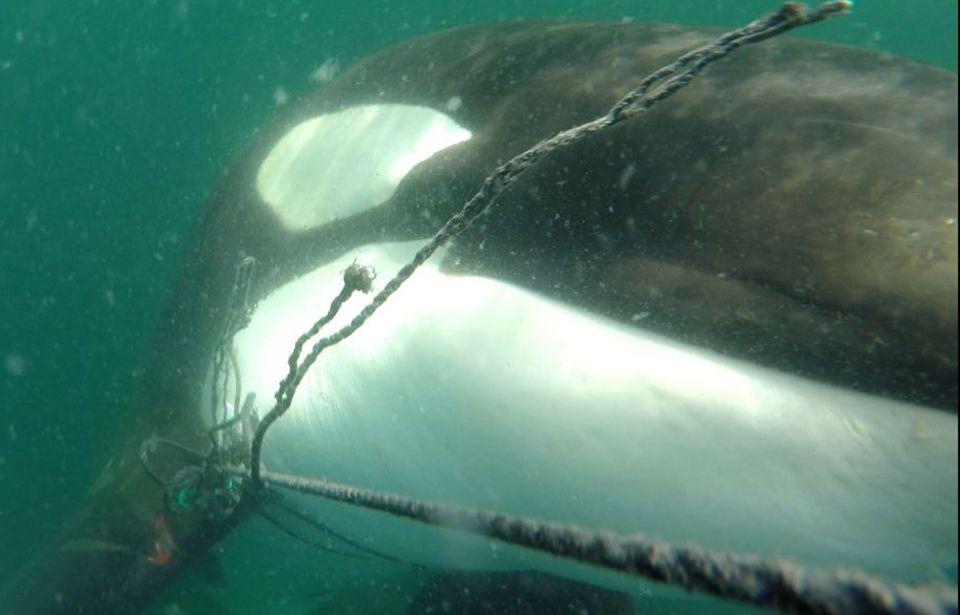 UNDERWATER POLECAM FOOTAGE FROM DECEMBER 27, 2019 SHOWS A DOUBLE WRAP BETWEEN THE ORCA'S PECTORAL FINS AND ACROSS HIS CHEST. PHOTO: ORCA RESEARCH TRUST

An orca who became entangled in a crayfish line in Northland has been spotted for the first time in more than five months.

The sighting has been called “a major breakthrough” by the Orca Research Trust, who’s hopeful it can still help the male orca.

Lead scientist Dr Visser of the Orca Research Trust said it’s unlikely he has freed himself, given how tight the rope was wrapped.

“We can only imagine it’d be in a lot of pain… eventually with enough pressure, he could actually lose his pectoral fins.”

Only the cray pot line was cut off after several attempts to release him over Christmas.

Yesterday’s sighting also marks the first time the orca has been seen with his pod, who he was separated from while being released.

“Like all of us, family is important and that’s the case for these animals as well.”

His survival these past few months would’ve depended on the aid of other animals.

“They provide physical support and they go patch food for [the injured orca] and bring it back,” Dr Visser said.

The Department of Conservation (DOC) said it’s establishing if the orca is still entangled to work on a disentanglement plan.

Dr Visser is urging the public to call 0800 SEA ORCA with any sightings.

There are fewer than 200 orcas living in New Zealand’s coastlines.

Family is important to orcas too. Photo: Bart van Meele on Unsplash