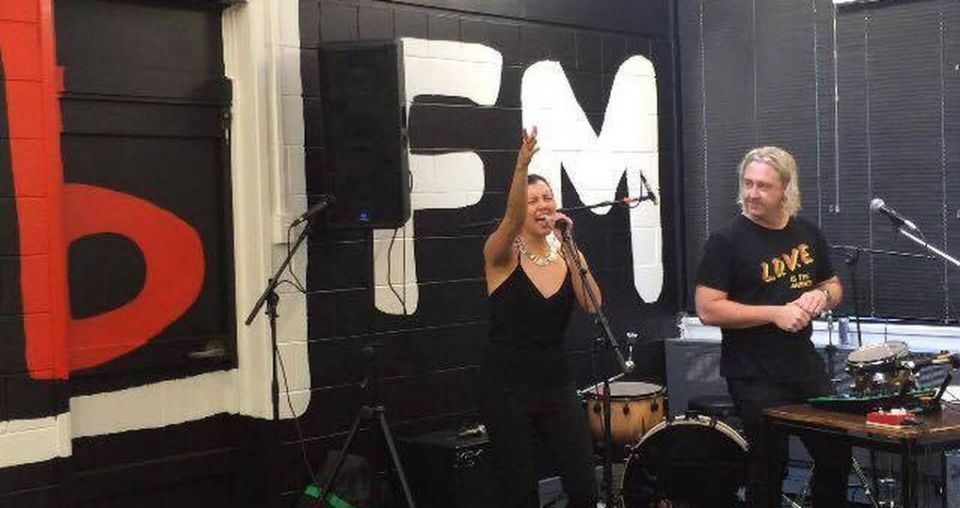 Auckland disco band Falsetto gets their groove on live in the bFM studio. Photo: Michelle Prendiville

The Broadcasting Standards Authority has rejected a complaint about a promo on student radio station 95bFM that features the words “f**k-knuckles, c**k, and piss, balls” and has been broadcast for 25 years.

The promotion is a broadcaster publicity notice that reminds listeners about the broadcasting standards complaints process:

“At this radio station we do our utmost to abide by the Broadcasting Standards Authority and their rules and guidelines.

“If you seriously think we’ve crossed the line on air, give us a call on 309 4831 and tell us about it. We’ll be able to help you out and tell you the procedure if you wish to make a formal complaint to the Broadcasting Standards Authority.

Listener Jeremy Evans complained to the BSA this April that the notice breached the standard of good taste and decency, saying he could “take no more” after listening it for three years.

Mr Evans said he found the words offensive because they created “unpleasant mental images of a sexual nature”.

“I am of the opinion that your announcement is antagonistic to the BSA and its purpose.  It seems to ‘raise the finger’ at the BSA in what I see as a juvenile attempt at humour.”

In the broadcaster’s response, 95bFM programme director Sarah Thomson said the promo’s original intent was far from sexual and not meant to disrespect the BSA.

She also said the offending words are a “knowing wink” to listeners, and the promo has been a fabric of the station for more than 25 years.

It had been used on a limited-edition T-shirt that became best-selling merchandise.

“Most listeners find the words semi-ridiculous, silly even.

“Sadly, in this respect, you appear to be outnumbered.”

BSA acting chair Susie Staley said the authority did not uphold the complaint after not finding harm at such a level that justified placing a limit on the right to freedom of expression.

She said the segment was unlikely to undermine community standards, as the swear words are used satirically instead of in an aggressive or sexually graphic manner and 95bFM’s audience were young adults who were university students.

Justin Wong is also a presenter of the Wire programme on 95bFM.