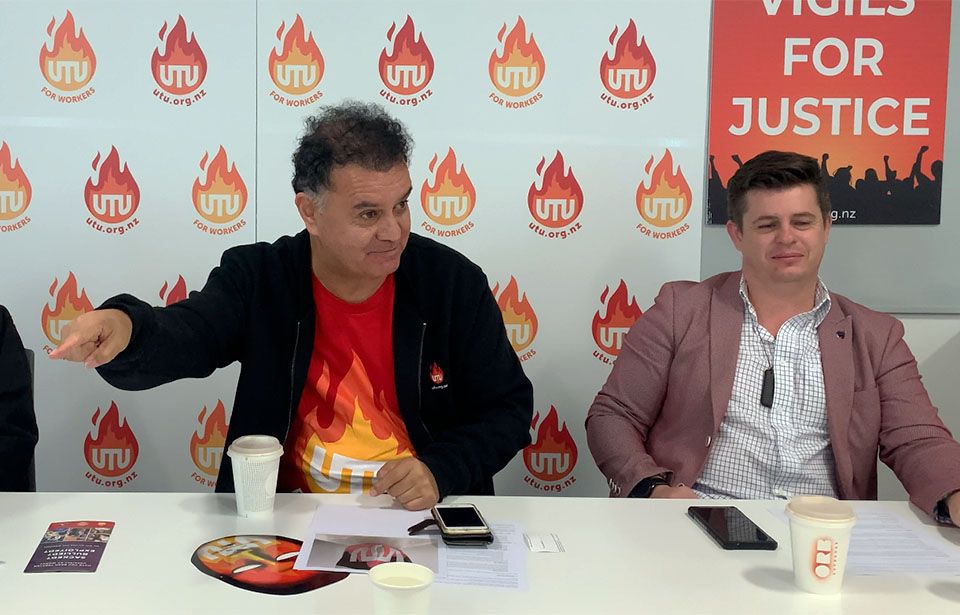 Matt McCarten (left) and lawyer Bryce Hamilton at the relaunch of the UTU campaign to end illegal exploitation of workers in New Zealand.

Bosses shown to be breaking employment law should expect their homes to be picketed as part of a new campaign that seeks justice for mistreated workers.

Matt McCarten (Ngāpuhi) is relaunching the United Trade Unionists for Workers (UTU) campaign on May 1 and aims to stop exploitation and end workplace abuse within three years.

UTU will launch by sharing the stories of real-life workers who have been exploited by their bosses.

A social media campaign will ask New Zealanders to sign petitions in support of these workers and teams known as UTU Squads will picket employers’ homes and businesses.

"There's a reason we've called it UTU, and the summary is justice. When people are mistreated, their mana has been diminished and it must be restored," said Mr McCarten.

The union now uses a model that combines advocacy, campaigning and enforcement.

Through partnerships with One Union and Migrant Worker’s Association, UTU provides legal representation and support for workers who have experienced mistreatment in any type of workplace.

After receiving a complaint from a worker, activists and lawyers from One Union would start case work to resolve the issue with the employer.

This will include UTU conducting “vigils of justice” outside employers’ residences and publicly holding the employers accountable through social media and online petitions.

"We're going to hit one every week, every Sunday we're going [to picket].”

The union also plans to conduct regular checks on employers to make sure they are complying with employment law.

Mr McCarten is confident the campaign will gain widespread support, given its focus on real-life stories of exploitation.

"In a few months’ time, I think that we will have the biggest network of any union ever in this country. I have no doubt, because the stories will drive it."

Mr McCarten gave the example of a pregnant migrant worker being told by her employer, “You terminate your pregnancy or else I’ll terminate your job.”

Stories range from the sexual harassment of teenage girls by their manager, to migrant workers being forced to pay their boss $95,000 to avoid deportation.

“I think New Zealanders have to have the mirror put up to their faces and say, is this the country we’ve become? This is not the Kiwi way,” said Mr McCarten.

The official launch of the campaign and its website took place at  AUT University recently.